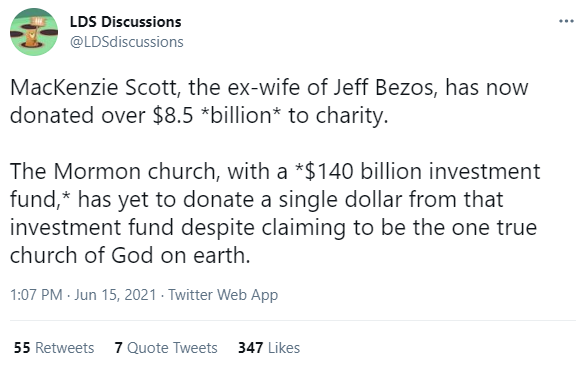 Ok, I saw this tweet, but I didn't want to respond directly to it, as I don't want to drive up "engagements" for someone who obvoiously wants to start fights online.

note: if you are on mobile and the image with the tweet doesn't show up, see it here.

There is nothing new here, this is just another person who hates the church and wants to destabilize as many people's faith as possible. This tweet is fairly representative of it's kind. It is a bunch of rhetoric and manipulation packed into one blurb. Let's take a look at some of the techniques used, whether the author knowingly or unknowingly used them.

Not part of just this message, but every message this account sends out is the account name itself. Naming the account "LDS Discussions" is clearly meant to fool some people into thinking it might be for faithfull discussion of topics important to members of The Church of Jesus Christ of Latter-Day Saints. The account/podcast "Mormon Stories" is named in a similar fashion. Sure, people who start to scroll the account soon see who's side it is on, but it draws more eyeballs this way. What is a more honest way to act? Use your real name. Or, if you want to remain anonymous (which I understand), use an account name that more accurately discloses your antagonistic position. If you can't bring yourself to be that honest, at least something that is off-the-subject ambiguous.

MacKenzie Scott donated a enormous pile of money to charity.

The Church of Jesus Christ of Latter-Day Saints is a charity.

If she had donated 100% of that money to the church, then the line would have read exactly the same. In reality, she donated a ton of money to a wide variety of schools, museums, and other organizations that she believes do good in the world. I think it's great she did that.

LDS Discussions, however, seems to operate from the position that all Ms. Scott's charities are doing good for the people, and that the church does not do anyone any good. That's an odd position, as the church very clearly does good for a lot of people, and is primarily staffed by volunteers.

LDS Discussions uses the number $140 Billion. That is an exaggeration of the $100 Billion dollar number that was claimed by the "leaker" a while back. This may seem like a nit pick, but it shows that the author is willing to lie to try to make their point.

The implied and stated false assumptions are in bold.

The tweet was a tightly packed nugget of empty propaganda. It skews the casual, uninformed reader toward believing the church is bad without making any solid points.

I happen to believe otherwise, that the church is true. I also believe that Christ lives and took my sins upon him.